The article has been verified to ensure the highest possible accuracy (content includes links to reputable media sites, academic research institutions and, occasionally, numismatic studies). All content on our website has been reviewed, however, if you feel that our content is inaccurate, outdated, or questionable, you can contact us to make the necessary corrections.
EXTERNAL SOURCES: pcgs.com ngccoin.com coins.ha.com
INDEPENDENT SOURCES: usmint.gov money.org
The spot price of the gold Centenario coin is USD 1,953.11 (ask spot price updated to 01/28/2022). Note: Normally the spot price of a bullion coin is the minimum at which it should be sold, since the fact that it is minted in an internationally recognizable coin gives it value. Read on to learn more

How much is a Centenario worth today?

With an extraordinary capacity to increase their value, centenarios are a symbol of Mexico’s history, and can become a great investment. At coleccionistasdemonedas.com we take as a reference price the bank quotation, because although it is usually more conservative, it is the most reliable and less volatile price.

How the price of the Centenario (50 pesos) evolves

The price of a gold centenario fluctuates on a daily basis, so it is best practice to be well informed of both its selling price and its buying price. In many occasions both values tend to be different due to the margin that the seller reserves for himself. Collectors of Mexican centenarians who bought at market price in 2011 or 2012 paid a price of 9,900 pesos for this gold coin.

But… how much is a Mexican 50 peso gold coin worth?

The key element of this valuable Mexican currency is its price. If you can buy it cheap it will be a great investment for these 3 reasons:

Check out our method to know the price of any coin.

Mexican gold Centenario value – the reason for the value increases

The price of gold largely determines how much a gold centenary costs. Thus, when there is a worldwide rise in the price of gold, the value of the centenary also rises. As in any financial crisis, investors and banks tend to shelter their money in a safe haven, in order to avoid the loss caused by the depreciation of the currency. As a consequence, the price of gold enters an upward trajectory.

Keys to a good investment in Centenario Coins

If you want to invest in gold and position yourself on the value of gold on a daily basis, look for ways to acquire this currency at a low premium. In crisis situations this premium would go up.

What is premium and why is it important?

The premium is an indicator of the relationship between supply and demand. It can have three important values:

Due to the large amount of counterfeits that abound in the market, we recommend purchasing these coins in reliable places. Always in E-shops with a good reputation or local coin dealers.

How to know if is an authentic Centenario 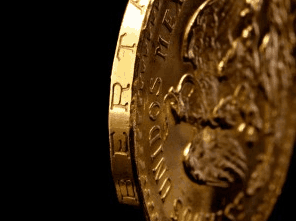 As far as gold is concerned, it is very easy to know if the coin is made of gold or another metal. There are many methods of identification. The simplest and most effective is that of the magnet. This way we can distinguish a gold piece from a gold plated one. To perform the test, first get a very strong magnet. Since gold is not a magnetic metal, if the coin is attracted to the magnet, we will know it is a fake.

How to buy a gold Centenario

It is preferable to avoid buying it from private individuals. Banks and professional gold sales companies are the best places to buy a gold centenary.

You can sell it at a bank, a professional company or at coin auctions. Check out our guide on selling old coins to learn more.

Since it was minted in this country, it is only valid as legal tender in Mexico. It has been valid since it was put into circulation in 1921 (Banxico data).

What the gold Centenario looks like – Description and characteristics

This coin attracts many buyers because of its dimensions, beauty and value. Its main characteristics are:

What is a gold Centenario – History

Gold centenarios (centennials) were minted for the first time in 1921 as a commemorative coin for the 100th anniversary of Mexico’s independence. The so-called War of Independence lasted from 1810 with the “Grito de Dolores” by Miguel Hidalgo, until 1821, with Iturbide’s triumphal entry into Mexico City. To celebrate this milestone in Mexican history, the “Angel of Independence” (Glorieta del Paseo de la Reforma) was erected in 1910 by Porfirio Diaz. This imposing column located in the heart of Mexico City holds an angel on its top. This winged victory, based on the Victory of Samothrace by Phidias (can be seen in the Louvre Museum in Paris) and in turn on the Greek goddess Nike, symbolizes the victory of the heroes of the battle. The design of this coin was conceived by Emilio del Moral and represents the Angel of Independence.

Obverse of a Centenario coin

The obverse shows the winged victory allegory with a backdrop of the Popocatepetl and Iztaccihuatl volcanoes. It has two dates at the bottom:

It also shows the face value of the coin, 50 pesos, and its gold content: 37.5 gr of pure gold. The 1943 mintage offers a variation: the latter value appears on both sides of the goddess. 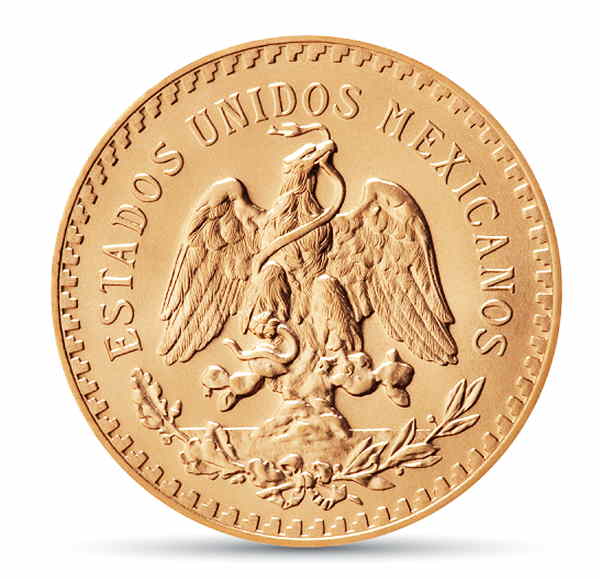 The reverse depicts the image of a Mexican eagle hunting a snake. It is surrounded by the legend “Estados Unidos Mexicanos”. The lower part shows a laurel branch and an oak branch, both held by a ribbon.

Although the centenario began to circulate in 1921, they were suspended in 1931. Due to its success, it was reissued in 1949 until 1972. This great demand for the centenario resulted in the circulation of a total of more than 10 million copies. It is worth mentioning the special mintage made in 1943. With a mintage of almost 90,000 pieces, it offers a larger diameter, but a similar weight to other mintages. As previously mentioned, the obverse legend also differs.

How to preserve a gold centenary

Whenever you intend to sell a collector’s coin or an antique gold coin, you need to ensure that it does not lose any value over time. For this, conservation is essential. You should pay special attention to:

It is best to keep it as it is delivered to you – in the plastic capsule.

Centenario Gold in a Necklace 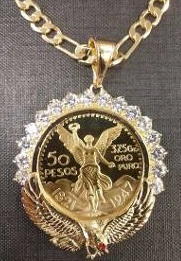 Did you know that you can set the centenarios with a chain and wear it as a pendant? With this option, which seems to be chosen mainly by women, you have to be careful with the union with the chain (bezel). And remember, under no circumstances should you damage the coin if you do not want it to lose value.