Would you like to know which valuable pennies are considered important coins with value? Here’s a penny for our thoughts.

Made in the United States since 1856, these valuable little coins can give more than a few surprises as far as their value is concerned.

If you want to know the sales prices quickly, you can see them below. However, whenever we talk about coin prices, knowing a lot of details and additional information can be decisive. Therefore, if you have 5 minutes, we recommend you to read this article in its entirety.

What pennies are worth money?  It’s curious that precisely one of the most humble currencies in the United States can reach such extraordinary prices. Here is our old rare pennies value chart.

Are wheat pennies worth anything? The answer is most definitely – yes!  Its value does not correspond to their size at all…

Among the list of cents that are worth a lot of money, this coin stands out. For reasons that are still uncertain, a few were minted in steel in 1944. Experts claim that plates of this metal were slipped in during the minting by mistake.

With an average value of $60,000, these pieces can reach $86,000 in numismatic auctions. As with the steel ones, they are thought to have been minted by mistake.

Watch out! Given the price of these 1943 pennies with copper, many counterfeits are in circulation. Although many of them are actually from 1948, the ‘3’ has been modified to look like an ‘8’. In this case, if you test the magnet and it sticks to it, you know it is a fake.

In fact, almost all of them were made of steel. However, due to the minting error or perhaps forgetfulness of some copper plates, during this year these copper pennies made that are so expensive today were minted.

By the way, experts believe that there are still many yet to be discovered!

Among the most valuable, the next in line is the Doubled Liberty, which normally costs only $20, but in MS+ status can achieve whopping values of $10,000.

How to identify the Doubled Liberty variety?

The 1873 Indian Head one-cent piece comes in two types, depending on the opening of the ‘3’ in the year ‘1873’ embossment. In the photo above, the variety is the open type. On the other hand, the closed variety has a smaller opening between the upper and lower segments of the number ‘3’. Time to get your magnifying glass out!

Both varieties are valuable cents. But we coin enthusiasts are always talking about the Doubled Liberty. Otherwise, its maximum price is around $300.

What are pennies made of?

Copper, zinc… Its history is full of variations and ‘secrets’ that offer excellent opportunities for great profits! 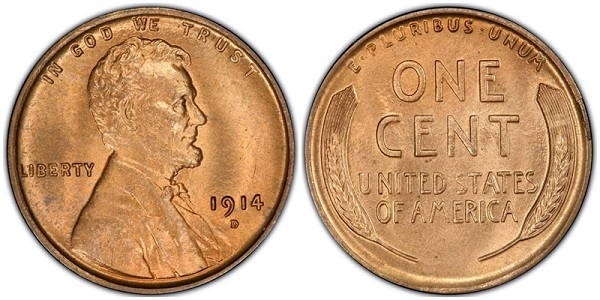 This tiny piece ranks third in this select group. It is a rare American cent minted at the Denver Mint (hence the D) and can fetch prices of up to $5,500.

Two versions of this wheat cent, named for the crop depicted on its reverse, and minted at the Denver Mint, are known to exist – without the ‘D’ and with the weak ‘D’. Given the difficulty of verifying them, it should be the job of an expert to authenticate it. The most coveted is the one without the D, which could be worth several thousand dollars – $33,000 to be exact. For the rest, the standard price is $175.

Less than one million of these coins were issued in 1877. If we compare it with the following issue numbers of 7.9 and 5.9 million, we can understand why they are so expensive without having to search for hidden rarities. It reaches values of an enormous $3200.

According to various sources, this Philadelphia cent is a treasured collector’s coin, as it can be worth a whole lot of money – $3000.

How do I know if my coins are made of steel?

This type of coin are one of the favorite pieces for counterfeiters. That is why there are many supposed pennies from 1943 made of this material that are just fakes. They are actually copper coins with a zinc coating, made specifically to sell them as genuine Wheat piece made of this metal.

How do you know if your valuable cents are fake?

Simple – with a magnet, you can tell if the coin is copper or steel-plated copper. If it sticks to the magnet it will be legit, otherwise, it is not.