Buying these coins with sets my result a good idea, so already include all the mints of each design or, directly, all the designs issued. In this case, the price varies from about $12 per design with three mints, to about $18.50 for the set of five in PROOF version or even $79 for a collection of the 2020 quarters in silver.

Do you want to know more about this type of currency? Next, we will analyze in detail each of the 18 quarters of 2020, and we will clear up some doubts, for example: what is the Quarter Bat 2020 – a type of Quarter that has given collectors of these coins the reason to speak because of the pair of bats engraved in its back.

One of the most interesting American coins to collect each year are the Quarter Dollars. This 25 cent coin is made of cupronickel and has a diameter of 24.26mm and a weight of 5.67 grams. A medium-sized coin, but without doubt, big enough to appreciate all the beauty of its design.

In 2020 we have five new coins of this type to collect.

In the following table, you can see the list of Quarter Dollars from the year 2020 with their release dates, as well as their prices according to the place of minting, always in a completely uncirculated state (taken directly from the coin cartridge without ever having been used).

The coin dedicated to Tallgrass Prairie National Preserve (Kansas) is the most valued with $34.95 per coin in proof grade. Here you can see a list of all of them:

Finally, in West Point, there is a peculiarity that makes them unique: on the obverse side, there is an engraving “V75”, which refers to the 75th anniversary of the end of World War II. These coins are mostly minted in the Denver and Philadelphia Mints. In San Francisco, they are minted to a lesser extent, including a trial version (Proof) that is highly valued by collectors.

The Quarter Dollar 2020 West Point type is considered the rarest and most expensive of the series.

As we said, in the year 2020 five new designs of these coins were minted. These belong to the series America the Beautiful Quarters Program that honors the National Parks of the American country since 2010. 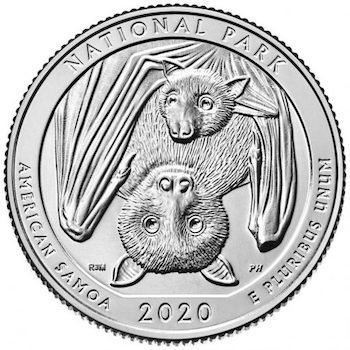 The first Quarter of the year 2020 was nicknamed Quarter Bat 2020, which pays tribute to Samoa National Park, located in southern Hawaii. A park with a tropical forest consisting of almost 5500 hectares distributed between three islands.

In the middle of the back of this coin, an emblematic animal of this climate is represented in hanging upside-down: the fruit bat. In this case, holding a baby bat.

Around it, with a legend that surrounds the whole face of the coin, appears at the top “NATIONAL PARK”; at the bottom left of this circular legend “AMERICAN SAMOA”; to its right the year of issue “2020” and to its right the motto “E PLURIBUS UNUM”, which means “from many one”.

The front is the same as every year, changing only the mint mark, and including or not the “V75” on the West Point mint, mentioned above. 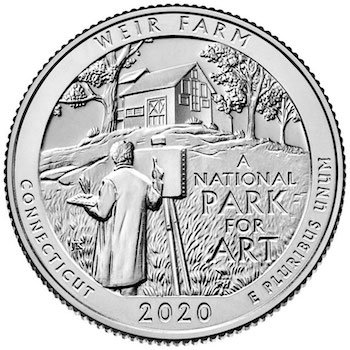 In May 2020, this second quarter dollar was launched, this time dedicated to the Weir Farm National Park located in Connecticut, with an area of 27.52 hectares. This park is known for its arts programs and classes.

For this reason, on the back of the coin, an artist appears portraying on a canvas the landscape of the park, which includes one of the 15 structures of the park, a fairly typical house. We can see an interesting difference with the previous coin, and this is that apart from the circular legend that includes the location and name of the park “WEIR FARM” and “CONNECTICUT” (and of course the year and the motto E PLURIBUS UNUM), right in the center of the written design there is a description that makes clear the purpose of this Park “A NATIONAL PARK FOR ART“.

It maintains the same front side as the other quarters, including the “V75” branded variant of the West Point mint. 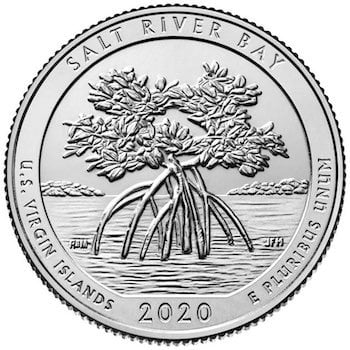 In July 2020, this coin was launched into circulation, honoring Salt River Bay Park, a national park recognized in 1992 and located in the Virgin Islands.

In this Park, the archaeological sites of great antiquity stand out, as well as its flora and fauna, which includes a great variety of species in danger of extinction.

That is why on the back it includes an engraved red mangrove (Rhizophora mangle), a plant species capable of withstanding the salt of the water on which it lives. In the circular legend, we find again in the same positions the denominations that we found in the previous coins: in the upper part the name of the park “SALT RIVER BAY”, to the left the place where it is located “U.S. VIRGIN ISLANDS”, underneath the year of minting “2020” and to the right again the motto that reads “E PLURIBUS UNUM“.

Nothing to highlight on the front, being able to include the most valued variant with the “V75” and the “W” mint mark. 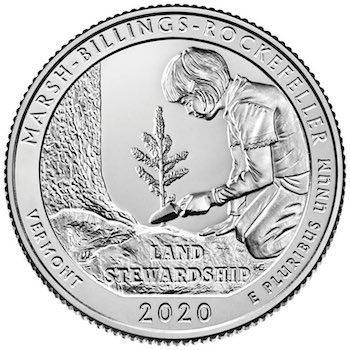 This 25-cent coin issued in September 2020 has the Marsh-Billings-Rockefeller National Historic Park, located in Vermont, on its reverse side. The importance of this park is that it is the only one dedicated to telling the story of nature conservation in the United States.

The park is named after three of its owners, conservationist George Perkins Marsh, Frederick Billings, and the last owners who gave the land to the People, the Rockefellers.

On the reverse side, a girl is planting a Norway spruce next to another tree. This design represents nature conservation for the future. Again a circular legend appears, where, in the upper part is inscribed the name of the park “MARSH-BILLINGS-ROCKEFELLER”, in the lower-left its location “VERMONT”, in the lower part the year of issue “2020” and on the right again the motto “E PLURIBUS UNUM“. Unlike other quarters of this year, in this one, as in the Weir Farm one, there is another inscribed legend in the center of the design, which in this case says “LAND STEWARDSHIP”, which could be translated as administration or conservation of the land.

Nothing to highlight on the front, the design is repeated including the “V75” variant of the West Point Mint (W). 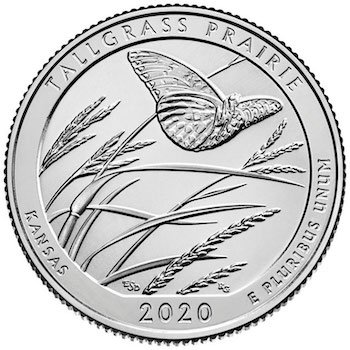 Finally, in November 2020 we have this last quarter, dedicated to the Tallgrass Prairie National Reserve located in Kansas, specifically in Flint Hills, which covers almost 4452 hectares. It is the largest prairie with various types of tallgrass in North America. This Reserve allows cattle breeders in the region to continue using tallgrass for their livestock.

The design features a butterfly (Speyeria idalia) flying over herbs called Gerardi, and “La hierba de don Carlos”, two types of grasses typical of North America and this high grass landscape. The arrangement of the legends is repeated, the upper one being the name of the park “TALLGRASS PRAIRIE”, its lower one the year of issue “2020”, on the left of the year the state to which “KANSAS” belongs; finally, on the right, again the motto “E PLURIBUS UNUM“.

There is nothing to highlight from its obverse that is equal to the rest of the quarters of 2020, with the valuable variant “V75” as well.

Is it worth collecting U.S. Quarters?

The reasons for their purchase and collection are simple, they are coins with:

This type of collection of quarters reminds us of the 50 State quarters program which, as its name indicates, was dedicated to making a compilation of the states of the country through these coins between 1999 and 2008.

The current collection dedicated to the U.S. National Parks will end this year 2021, so it’s a good time to buy all the quarters of the series that you need to finish your own collection.