Pennies are the lowest value coin in circulation in the United States, and for this reason, they are abundant and recognizable. It may seem that for this reason, they may be of little interest to collectors, however, the opposite is true. These small coins are one of the wheat pennies to look for more important in American numismatics. However, not every penny is suitable for a collector to pay a large sum of money.

Due to their common circulation, they are usually found quite worn out, which is why conservation is one of the most important factors for their higher price.

Being a coin that can be obtained very cheap in general, extraordinary cases do occur like, for example, this 1920-D Wheat Penny MS66 RD auctioned for $25,300 by Heritage Auctions.

Within the 1920 Wheat pennies, patina is a factor of great importance. Also, certain errors can greatly increase their value due to their scarcity and high demand by collectors as we will see below.

Since 1909, U.S. pennies have featured the bust of Lincoln on the obverse, a design by Victor David Brenner.

The weight of these coins remained at 3.11 grams until 1982. The metals that make up a 1920 Wheat Penny are 95% copper and 5% tin and zinc. In contrast, today they weigh as little as 2.5 grams and are made of copper-colored zinc.

How can you tell if you have one?

On the reverse of the one-cent coins minted between 1909 and 1958, we can see two ears of wheat surrounding, as if it were a laurel wreath, the central legend “ONE CENT – UNITED STATES OF AMERICA”. Just above this legend, appears the Latin motto “E PLURIBUS UNUM” (From many, one), common on American coins.

These spikes are the ones that give the wheat penny its name. To know the year of the coin we must look at the obverse. There we can see on the right side of Lincoln’s bust, the date “1920“. Under this number there may or may not be a letter, this is the mint, that is, the factory where it was produced. Above the bust of Lincoln, another motto appears, “IN GOD WE TRUST”, and to the left of it, the word “LIBERTY”.

The 1920 Wheat Penny is very abundant, with a mintage of over 400 million coins. There are three mints for their manufacture, a typical factor that distinguishes American coins in price.

To identify the mints on our cents, just look at the letter on the obverse, which has been mentioned above, under the number indicating the year of issue.

Each mint has a different mintage, which is why it is important to know the abundance or scarcity of coins minted in each city.

​Table of types of coinage/mint marks

Denver and San Francisco mints are the scarcest and therefore somewhat higher valued.

Three varieties of patinas to identify in the 1920 Cents

In addition to the mint, other differences must be taken into account to determine a greater or lesser value.

The main one is the quality, as in any other coin, as we will see later, but now let’s talk about the patina.

The patina is, simply explained, the tone or color of the coin. In more complex terms is the oxidized metal that coats many ancient bronze and copper coins.

Specifically, the patina is the result of the oxidation of the metal due to the contact with air and other elements that causes some or other colors. An original patina, generated by the years of “life” of the coin, is highly valued by collectors, therefore a coin should never be cleaned without consulting an expert since in most cases its value will be greatly diminished.

With coins as common as these, priority is given to the most special patinas, so a BN or RB may be undervalued, while an RD makes the coin more expensive because it is so rare in common coins. 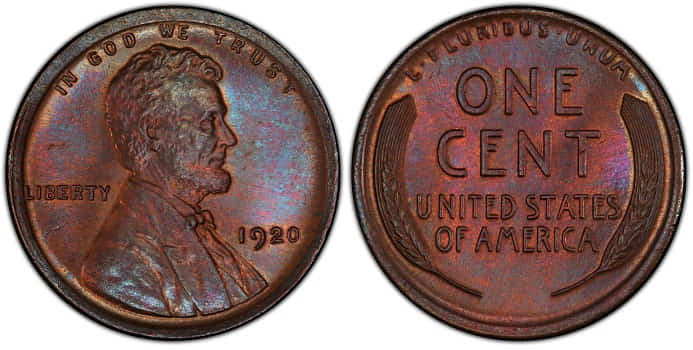 This patina is brown and is the most common of the three, visually it is the one that looks the most aged and, in fact, is the color that copper coins normally take on over time. You can check your current pennies and see how many have this dark, yet attractive color.

In some specimens with this patina that have not been circulated very often, greenish or bluish colors can be seen, normal in this metal, which makes it much more striking.

It is the abbreviation of Red and Brown, i.e., as the previous patina, it is a brown specimen, but retains the typical reddish tones of a newly minted copper coin.

It is the result of better environmental conservation, or at least with less exposure to humidity and oxygen than the previous one, regardless of whether a BN has hardly been circulated, but has been stored in a humid place.

This makes it somewhat rarer than the previous one and therefore costs a little more money. 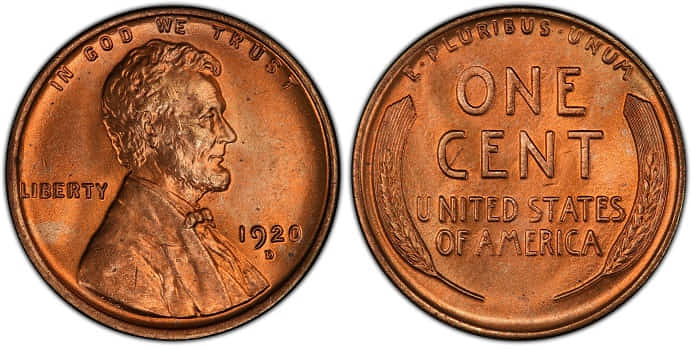 It is the red patina that copper coins have when they are newly minted, the rarity of this patina is the difficulty for a coin to be preserved with that tone for so many years.

It is the most expensive patina of the three, being the most appreciated by collectors.

To preserve the actual patina of our coins, it is important to keep them in a stable and controlled place. This is why certified capsules are a wonderful option both for this and for knowing the grade as we will see below.

The higher the grade, the higher the price increases exponentially, since it is a factor of great importance, especially in coins that tend to circulate a lot, as is the case of cents.

To know the state of conservation of the coin we own or want to buy, we need to have an expert eye that we can hardly acquire without time or experience. This is why it is not a bad idea to resort to a TPG (Third Party Grading Service). These are companies dedicated to evaluating and awarding a score to our coins according to their condition. In addition, they certify the authenticity and encapsulate the coin for security purposes, both for its preservation and to facilitate its sale.

We have seen that 1920 is a curious year for Penny collecting. Most of the mintages are quite mediocre, so patinas and high grades will be more valued than in other years.

While most will not be of great value, checking your pockets can make you a lot of money if you find a special 1920 Wheat Penny.

This is a great option to get started in a Lincoln Wheat Penny collection or, in general, U.S. currency since as we said at the beginning, pennies are the most collected U.S. coin in the world.