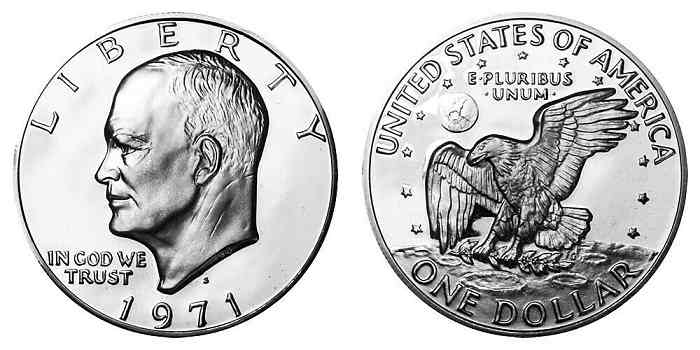 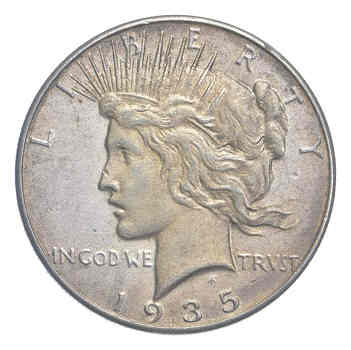 In 1971, 36 years after the last Silver Peace Dollar, the minting of the Eisenhower or “Ike” Dollars began and lasted only until 1978, when it was replaced by the Susan B. Anthony Dollar (click How much is a Susan B. Anthony dollar worth to know more about this coin). However, in spite of its short existence, it is a very popular coin due to its multiple varieties during its production.

How do you know if you have a Silver Dollar from 1971?

The obverse and reverse design was done by Frank Gasparro.

The obverse features the bust of U.S. President Dwight D. Eisenhower looking left with the initials “FG” referring to chief engraver Frank Gasparro. Above the bust, the legend “LIBERTY” and below, the date 1971. In the field and under the chin is the motto “IN GOD WE TRUST“.

The reverse is inspired by the Apollo 11 lunar mission insignia designed by astronaut Michael Collins. It depicts a bald eagle (representing the lunar module eagle) about to land on the surface of the moon, holding in its talons an olive branch as a symbol of peace.

In the legend above we can read “UNITED STATES OF AMERICA” and below the value as “ONE DOLLAR“. Surrounding the eagle there are 13 stars and in the background, we can see the Earth. 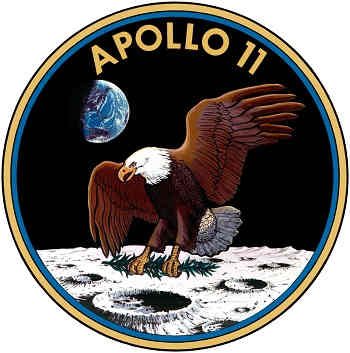 How many 1971 Eisenhower Silver Dollar types were minted?

There are several types of 1971 Eisenhower dollar.

The 1971 Eisenhower Dollar mintage amounts distributed by mint were as follows:

The 1971-S Silver Eisenhower Dollars were issued in two different formats: the common issue in a blue pack or booklet (“Blue Pack or Blue Ike“) sold to collectors, and the proof version presented in brown booklets with a monogram of a golden eagle (“Brown Pack or Brown Ike“). 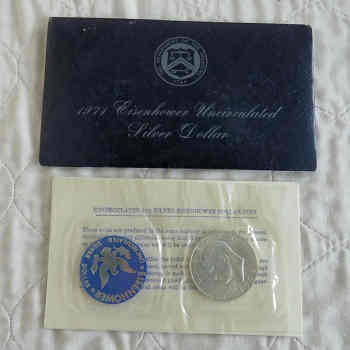 The Blue Pack is a special presentation for collectors of the 1971-S Eisenhower dollar. Because its mintage was very poor and the Mint was aware of it, inside each package we can find an explanatory note (see image). 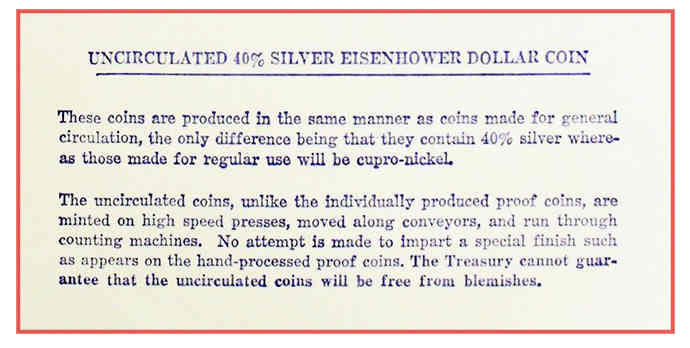 As can be seen in the note, the Mint was very clear and honest in explaining that these proof coins were produced on high-speed machines without any special finishing as was normally the case with proof coins that were hand-finished.

A blue token was also included in the original package. Therefore finding a 1971-S Eisenhower Dollar in high grades such as MS68 or MS69 is very difficult.

Regarding prices, this original package can be easily found on the Internet for between $14 and $25. 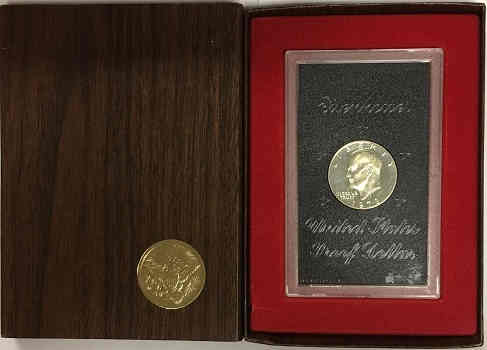 Unlike the Blue Pack, the Brown Pack contained more elaborate pieces in proof grades that rarely went below Deep Cameo. These pieces underwent much more careful minting and mirror back finishing.

Despite this, its price in the original presentation is not much more valuable than the Blue presentation.

1971 Silver Dollar-s: How to find the San Francisco mint mark?

The 1971 silver dollars present the mint mark just below the neck of President Eisenhower. However, we must keep in mind that for the Philadelphia Mint, this mint mark is non-existent, it is simply not minted.

For the Denver Mint, the mark is shown as the initial, capital “D”.

On San Francisco, the only 40% silver mint, the mint mark is a capital “S” and is shown in the image below. 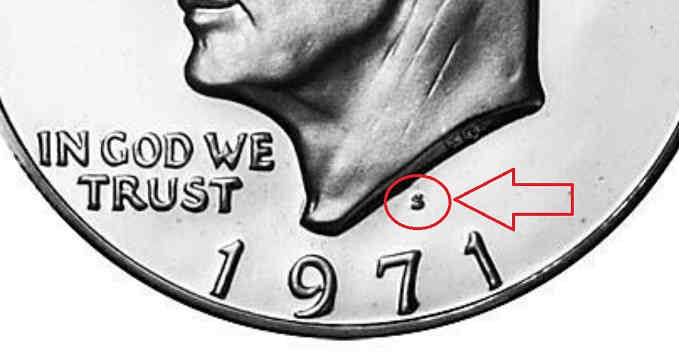 Were all 1971 Eisenhower dollars made in silver?

As we have explained above, the answer is no. Two types of 1971 Ike Dollars were produced, one for circulation (Clad version or regular strike) and the other with 40% silver content for collectors (Silver). Within the silver types, they were minted in the regular version (Blue) and proof version (Brown).

The 1971-S Eisenhower Silver Dollar has a diameter of 38.50 mm and a weight of 24.60 g, higher than the other 1971 Eisenhower Dollars without silver content.

The core is composed of 79% copper and 21% silver and the outer cover of 80% silver and 20% copper, which also differs from the regular 1971 Eisenhower Dollar issue.

In order to see the differences between the three dollars (Peace, Clad Ike, and Silver Ike) to which we have made reference to, for now, we have prepared the following table:

This is a very scarce piece (1971-S Type I Reverse DDO) that presents a double mintage on the obverse (DDO) and also a different type of reverse than the common one. Due to its magnificent mintage, it is believed to have been produced for presentation at a ceremony attended by President Nixon and Eisenhower’s widow.

Type I (“Low relief”) features more detailed bas-reliefs on the eagle’s breast feathers and the Caribbean Islands of the Earth seen in the background. 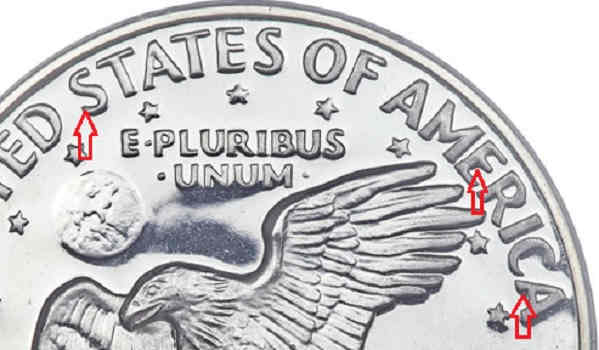 This 1971-S Eisenhower Dollar type has a characteristic double coinage of the reverse side visible mainly on the legends “UNITED STATES OF AMERICA“, “E PLURIBUS UNUM” and “ONE DOLLAR“. 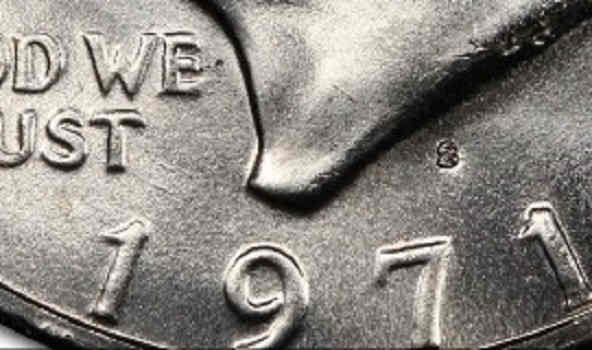 This variant is well known and consists of a double minting of the “S” mintmark (RPM) and is easy to detect with the aid of a magnifying glass.

These specimens of 1971-S Ike Dollars are very numerous and can be found in medium grades very easily on direct sales platforms and auctions. Therefore there are thousands of specimens in MS65 and MS66 grades and very few in higher grades such as MS68. 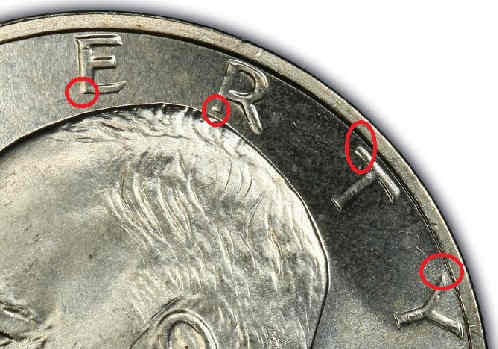 This variant has its origin in a different die in which the bases and legs of the letters E, R, T and Y of the word “LIBERTY” lack serifs or endings as in the normal 1971-S silver dollar issues.

To get an idea, see the image above.

These are not variants that are easily seen in high grades on the market, in fact, a PCGS encapsulated MS66+ specimen sold in 2019 for $2,150.

The highest value achieved for a 1971-S Ike Dollar Proof was seen in 2003 for a specimen in PR69 quality, the highest for these types of Eisenhower Dollars.

This price blew all previously known prices for 1971-S Eisenhower Dollar Proofs at MS69, as up to that time they were auctioned at around $30, and at later dates such as 2005, they moved between $33 and $35.