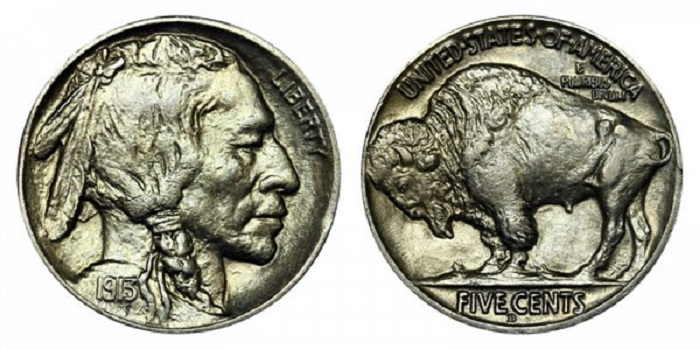 During the years 1913 to 1938, the 5 nickel cents known as the Buffalo (or Indian Head) was minted. This small coin presents one of the most beautiful, original and collectable designs of the American coins.

James Earl Fraser’s design lived through the Great War, the Great Depression, and ended at the dawn of World War II. Therefore it is not surprising to see well-weathered specimens with no visible date, due to their high circulation.

If you want to know which 5 cents Buffalo nickels are the most valuable, according to their dates, mints and variants, you should not pass-up the information we offer you below.

First of all… How do you identify a buffalo nickel?

Before delving into the prices of this type of currency, you may want to know the characteristics of this historical currency:

What key ideas have influence over the value of a Buffalo (nickel with an Indian head)?

Here you can find some important info about the coin’s dates and mints:

The original design of the Buffalo nickels represented on its back an American bison or buffalo standing on a hill or promontory. The coinage had excessive relief so that the value and other areas of the back were quickly worn away by use.
Although production of 5 cent Buffalo nickels had already begun in 1913 with the original design (the so-called type 1), it was decided to modify the design of the back to preserve the characters from wear and tear by circulation.
The main difference between type 2 and the original type is the inclusion of a line under the ground where the buffalo stands, with a little more relief, which demarcates the value of “FIVE CENTS“.

A total of 1,209,000 5-cent Buffalo nickels were minted at the San Francisco Mint in 1913. This is the third smallest mint issue of any year.

During the year, this date and type has appeared several times at auction, having been auctioned off at the prices shown in the table. The maximum value reached this year is $8,225, for one copy in a MS66+ graduation.

In 1916, 63,498,066 5-cent Buffalo nickels were minted at the Philadelphia Mint, making it a very common and undervalued year for circulating specimens.

However, some units of this same year and mint have a scarce variant much-valued by collectors, consisting of a double minting on the obverse (Double Die Obverse), very evident especially on the date. In fact, it is one of the most famous double mints of the 5-cent Buffalo nickels.

This 5-cent Buffalo nickel variant belonging to the Denver Mint was created by using the 5-cent coins from 1917 and rewriting them with the date 1918. It was not until the 1930s that this rare variant was discovered.

It is the most sought-after and highly valued variant by collectors of the 5-cent buffalo nickel, even more so than the 1916 DDO. In order to have a clear comparison between these two variants, we have done a small study comparing auction prices over the last few years, shown in the following table.

In 2020, the highest-ranking copy that has gone to auction was an MS64+ that was auctioned at $99,875. The great value and scarcity of this variant are evident when we see that some copies with G4 graduation have been valued at auction between $504 and $540.

With one of the lowest runs – 1,557,000 units – of all the years and mints in which the 5-cent Buffalo nickel was minted, the 1921 San Francisco specimen is renowned as a rare date to find in high grade by collectors.

As we have previously mentioned, the San Francisco mint made the least amount of rolls each year, so its coins are in higher demand than those of Philadelphia or Denver.

The 1926 San Francisco Buffalo nickel is famous for being the variety with the lowest circulation of all, 970,000 units.

This year, the auctions of the different graduations of this year and mint are shown in the table below. The highest graduation seen at auction has been an MS64, of which PCGS has registered 187 copies.

There are several theories about the origin of this variant. The most plausible one seems to be motivated by the intervention of an employee of the Denver Mint. It seems that out of the total of 17,826,000 Nickel Buffalo 5-cent pieces, the mistake that makes them so valuable for collectors was due to human error.

This employee, when trying to eliminate a defect in the coin’s stamp, made the buffalo’s front-right leg inferiorly minted on the coin, giving the impression that this leg was missing.

This is a very common mistake and is often easily found on the internet. In fact, only in 2020, we have found it in auctions more than 37 times in different qualities, reaching the prices listed below:

Other valuable types and errors

The above dates, variants and errors are not the only ones that can reach impressive prices for high or medium-high valuations, i.e. there is no closed list of 5-cent Buffalo nickel types with high value.

You can also find certain errors (DDO in other dates, displaced mintings, minting defects produced by impurity, etc.) that are also much sought-after in the collector’s market and which we should always look for as an investment due to their value.

As a final note, we have noticed that – with some exceptions – the prices of the 5-cents Buffalo nickels have:

Rafa Sánchez
Numismatic collector with a passion for history, particularly Spanish history.
I have a degree in Business Administration and Management and numismatics studies at the University of Murcia (Spain).
My main sources are the American Numismatic Association (ANA), the Numismatic Literary Guild (NLG) and numismatic publications: CoinWeek, COINage, The Numismatist, Numismatic News and Coin Values.
This website uses its own cookies to function properly, anonymous analytics and advertising cookies. Our partners (including Google) may store, share and manage your data to deliver personalized ads. You can accept, revoke or customize your settings for this site at any time from the cookie policy.
YesNoMoreSettings
Cookies