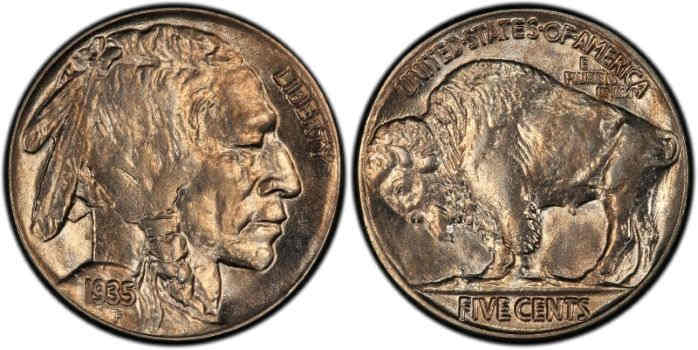 Keep reading to find out more…

Between 1913 and 1938, the 5-cent coins of the United States of America depict a buffalo, an animal native to North America, on the reverse, and a Native Indian on the obverse. They have always maintained the same weight of 5 grams and the material of 75% nickel and 25% copper.

Do you have a 1935 five-cent coin? Want to know how much it might be worth?

How much are 1935 Buffalo Nickels worth?

Depending on certain factors, 1935 nickels have greater or lesser value, since in general they do not usually have high prices for such common coins.

The first factor when valuing a Buffalo nickel is to know the state of conservation of the coin, that is to say, the grade that is attributed to it according to its conservation over time. The higher the grade, the higher the price increases, exponentially. In a poor condition it can be worth less than a dollar, however, in the highest grades it can exceed thousands of dollars.

How to grade your coin?

To know the state of conservation of the coin we own or want to buy, we need to have an expert eye that is acquired with time and experience. That is why it is not a bad idea to resort to TPG (Third Party Grading Service). These are companies dedicated to evaluation and give a score to our coins according to their condition. In addition, they certify the authenticity and encapsulate the coin for security purposes, both for its preservation and to facilitate its sale.

Knowing the mint that issued the coin

The second factor would be where the nickel was minted, that is, where it was manufactured. On the 1935 five-cent coins there are three possible mints (factories):

Where can we find the mint mark?

It is simple: on the reverse of the coin, under the buffalo, we find the word “FIVE CENTS“; below, there may or may not be a letter indicating the mint. If there is no letter, this is Philadelphia, otherwise, it may be a D or an S as we have seen previously.

What makes the 1935 Buffalo Nickel rare?

We could consider rarity as the third factor. That is, that they contain some error or variant that, together with the quality, increases the price due to their scarcity.

This year’s most quoted Buffalo errors are:

This error can be seen on the reverse of the Philadelphia five-cents.

It consists of a double minting of the reverse of the coin, that is, two strikes instead of one when stamping the design on the flan of the nickel. This causes the image to appear somewhat doubled, or with a different relief design.

In the word “FIVE CENTS” is where we can see the error.

Similar to the previous error, however, only located with the Denver mint mark (D). In this case, we can see how this letter under the buffalo is minted twice, being displaced. 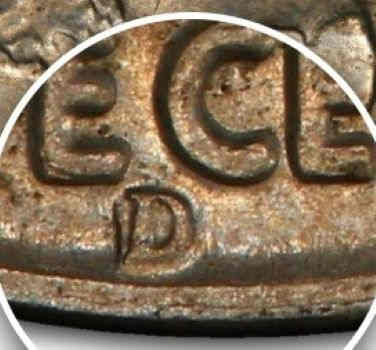 These errors, despite seeming unremarkable, cause a furor among collectors due to their scarcity, and it is for this reason that thousands of dollars are paid depending also on their conservation factor. In the following table we can see how much these two cases are worth:

How do you know if it is valuable?

We can assess whether our currency will have a high price by looking at the above factors:

Graduated in Labor Relations and Human Resources. I have been trained in numismatics by the University of Murcia. I am a specialist in Spanish currency (from the Catholic Kings to today), euros and large silver modules. My main sources are the American Numismatic Association (ANA), the Numismatic Literary Guild (NLG) and numismatic publications: CoinWeek, COINage, The Numismatist, Numismatic News and Coin Values.