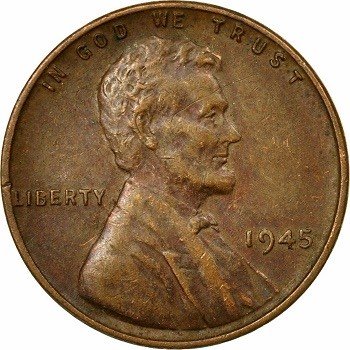 In American numismatics, the Wheat Penny or Wheat Reverse Penny is the name given to the one-cent coin with the image of Lincoln minted between 1909, when it was first minted, and 1958.

This is because the design of its back during those years depicted two ears of wheat surrounding the value. During its more than one century of life, the design of the back of the Lincoln or Wheat Reverse Penny has undergone several modifications.

On the back of the 1945 Lincoln Penny appears, from top to bottom, the following: “E-PLURIBUS-UNUM“, the value in letters “ONE CENT” and “United States of America“; all surrounded by the two ears of wheat as a symbol of prosperity. 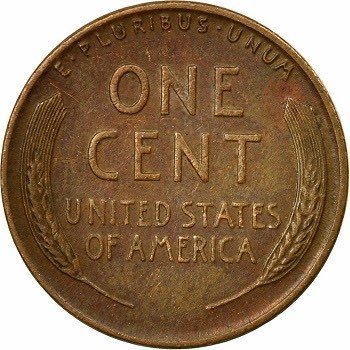 On the contrary, the obverse side has remained almost unchanged since its inception. It shows the bust of President Lincoln looking to the left, above “In God We Trust”, on the left appears the word “Liberty” and on the right the date 1945, plus the mint mark.

The 1945 Lincoln Penny was designed by Victor David Brenner. Its composition is 95% copper and 5% zinc. The weight is 3.11 grams and its diameter is 19 mm.

Where is the mint mark on the 1945 Lincoln Penny?

The mint mark on the Lincoln Penny is on the front, just below the date, which is to the left of the Lincoln bust.

Regarding the mint mark:

What’s the rarity of 1945 lincoln penny?

The 1945 Lincoln Penny is not a scarce coin, rather it was minted in large quantities during the year 1945.

As for the quantities minted in each mint, they are shown below:

This year of 1945, no high-quality pieces were coined at Proof.

In total, among the three mints, almost 1,500,000,000 specimens of the 1945 Lincoln Penny were minted, with the Philadelphia Mint being the one that produced the most units, followed by Denver and San Francisco, the latter two with somewhat more similar productions.

For our investment and collection, it is important to know that the most demanded and valuable Philadelphia specimens are those with a graduation higher than MS66, since there are numerous specimens in MS65 and lower graduation.

Tip: when looking for a 1945 Lincoln Penny try to get the RED (RD) type which are usually better valued in the market than the RED & BROWN (RB) and BROWN (BN) types.

What are the most valuable 1945 Lincoln Pennies?

Below we show some of the 1945 Lincoln Penny coins with the highest prices reached in sales and auctions during the last few years. At the end, you can check out valuable mistakes and rarities of 1945 Lincoln Penny that can be found. 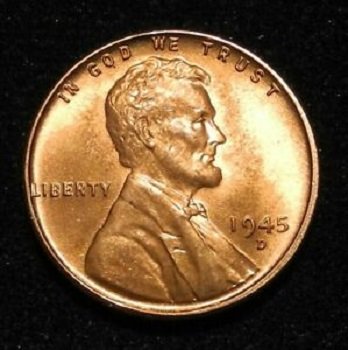 Something similar to what happened with the 1945 Lincoln Penny RED occurs with the specimens of the Denver Mint, much less prolific than Philadelphia, in the sense that there are thousands of specimens in the market with MS66 quality or lower but there are not as many units in higher graduation.

In inferior quality, their prices are significantly lower. In graduation MS67+ RD several units have appeared this past year of 2020 getting auctions in the interval $324-$625.

With 1,040,515,000 units minted in Philadelphia, you would think that finding a high-quality mint this year would be easy enough, but it is not.

San Francisco is the scarcest mint of the three.

The 1945 Lincoln Penny DDO (Double Die Obverse) type is an error variant, to call it what it is, that occurs when a double die is made at the time of coining. This can occur on the obverse, the reverse, or both. In this case, we are talking about the obverse.

To be able to observe this double coinage on the front, it is essential to look at the letters of the legend as this is the area where it is best appreciated.

This error, which for other types and dates are easy to find, for the 1945 Lincoln Penny it is a valuable and very rare error. It has appeared very few times on sale so we have no way to value this piece monetarily, although a 1945 Lincoln Penny DDO in conservation MS64 RD was sold on eBay for $395.

Which varieties of the 1945 Lincoln Penny errors are valuable?

We show some pieces that can become valuable based on their quality but also, and above all, the type of error involved. It is not a closed list in the sense that it could be that a copy falling into our hands presents some of these errors, if we are able to detect them.

This is a Philadelphia copy that has three types of errors or variants in the same currency.

This piece was auctioned at the AU58 graduation in December of last year (2020) reaching a value of $480. 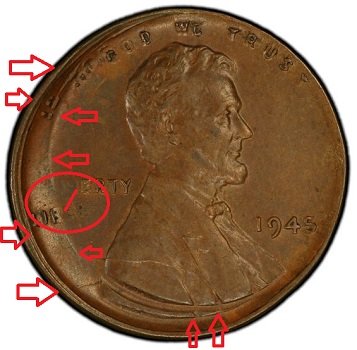 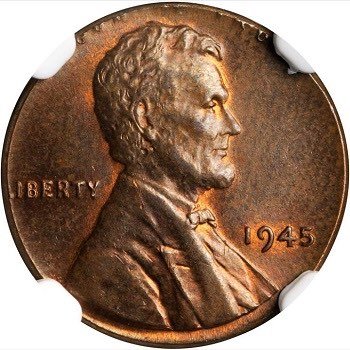 This is the Lincoln Penny coined on a considerably smaller piece from ½ C of the Netherlands East Indies that leaves out of the cospel the obverse legend “In God We Trust”.

Another important difference is in their weight. While the 1945 Lincoln Penny weighs 3.11 grams, this error only weighs 2.3 grams.

In 2019, several specimens minted on these coin blanks came up for public auction. Their auction price was:

Key aspects of the 1945 Lincoln Penny to consider

As a conclusion we recommend first to look for high qualities of the 1945 Lincoln Penny, starting from MS66 for specimens from the Philadelphia Mint and in MS64 qualities or higher for coins minted in Denver and San Francisco.

Generally, coins with RED coloring are more in demand and more valuable than the other two types (Brown or Red & Brown).

It is worth observing the general aspect of the 1945 Lincoln Penny, stopping especially in the legends and borders in case it could present a double coinage, a reactivation, a displacement, etc. that could provide it with a superior monetary value.