Lincoln Wheat Pennies are part of the Lincoln Pennies family (here’s a Lincoln Penny values chart 2021/2022) and some of them are one of the most expensive coins in the world. It is widely available and easy to find in good condition, making it a very affordable and fun collection for any contemporary coin collector. Look for them in your pocket change!

If you want to know Wheat pennies value by year you can see them below. However, whenever we talk about coin prices, knowing a lot of details and additional information can be decisive. Therefore, if you have 5 minutes, we recommend you to read this article in its entirety. 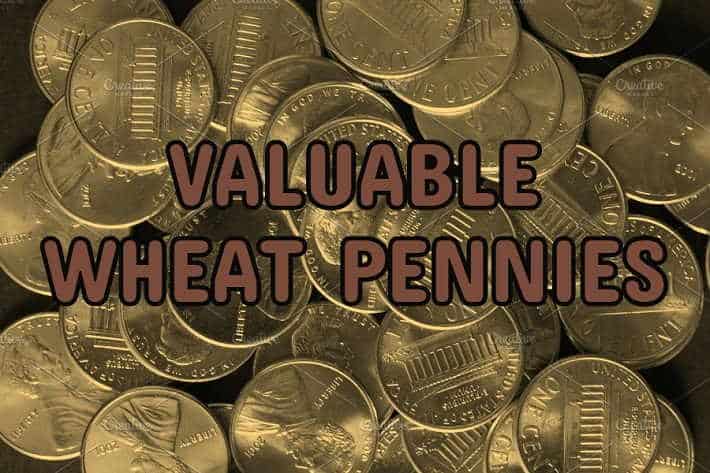 The value of most expensive Wheat Pennies

Are wheat pennies worth anything?These series of american coins, with few exceptions, were minted in incredibly high quantities. So in order for a coin to fetch a high price on the collector’s market or as an investment, we need one of these two characteristics:

– An especially good state of condition. It must not have suffered any kind of wear and tear from circulation, nor must it be nicked or scratched. It has to be pristine, just as it came out of the minting press, with a natural weathered patina and uniform color.

– One of the few rare pieces. You may want to look out for certain things about our coin. Keep reading to find out…

How to correctly identify pennies to collect

It has been in circulation for over a century. The motif began to be used in 1909, from a photograph taken of the great President in 1864, and is still in use today.

Abraham Lincoln’s bust has been virtually unchanged all these years. However, the motif on the back has changed somewhat. This article focuses on the so-called Wheat Penny, the first guy to be coined from Lincoln’s pennies.

This coin was used from 1909 to 1958 when it was replaced by the Memorial Penny, a coin that depicts the President’s bust on the front side, but completely replaces the motif on the back with an engraving of the Lincoln Memorial Building.

In order to properly reference our coin, we first need to know its mint. In the case of this piece, we have three possibilities.

We need to look at the small lettering just below the year embossment. 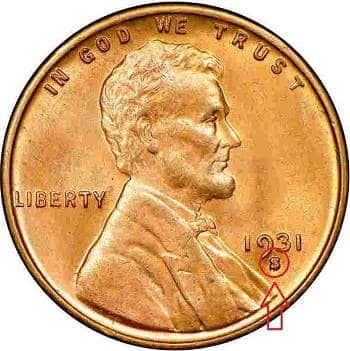 Another feature we must consider is the type of coinage our piece has. As a general rule, the Mint coins have two differing qualities:

In the images, we can see a normal circulating one (above), and a PROOF  coin (below). The differences between the two are more than clear. 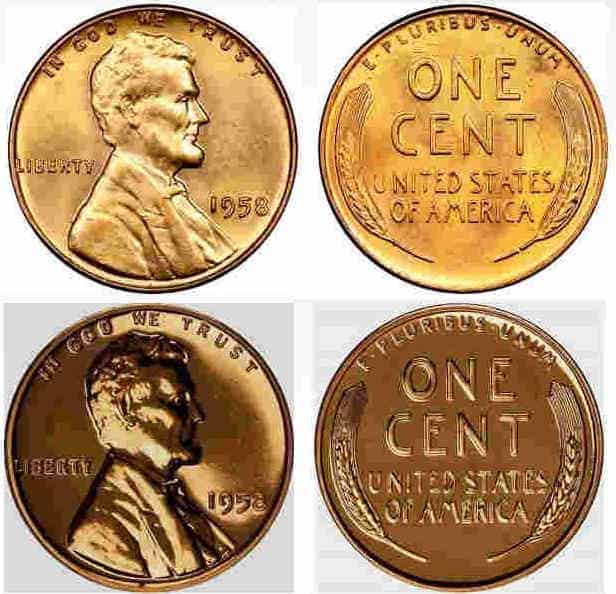 The last parameter to look at when referencing our coin is only necessary on the coins originating from the first year in which they were minted, 1909. The first coins to come out of the mint had the initials of the designer Victor D. Brenner on the back of the coin (VDB).

These pieces are far more rare than their non-VDB counterparts, although they were appreciated and treasured by numismatists and collectors from the beginning. Because of this, it is common to find them in an excellent state of conservation.

In 1943, due to the entry of the United States into World War II, copper for coinage became necessary for military equipment factories. To replace it, the Wheat cent was minted in a zinc-plated steel coin blank.

However, it is assumed that by mistake, some coin blanks left over from the previous year entered the press in the three mints.

For these pieces, of which about 25 are known in total, and many of them in circulation, hundreds of thousands of dollars can be forked out, including more than a million for the best-preserved ones.

The opposite case to the 1943 bronze coinage is the zinc-plated steel coinage, the 1944 one. In December 1943, it was agreed that these coins would be re-minted in bronze, but some coin blanks were leaked with the new wedges, and very few units were produced in the previous year’s material.

It should be noted that in that year there were a large number of steel coin blanks at the Philadelphia Mint, which were used to mint the Belgian two franc coin. Belgium, a country destroyed by the war, had to subcontract the production of cash to the American Mint. Check out your coin and don’t forget that the pieces of 1945 and 1946 also fetch good money.

The first one cent coins minted were produced with the initials of designer Victor David Brenner at the bottom of the reverse. Among these, the rarest are those minted at the San Francisco Mint.

It is important to keep in mind that since the only difference from the normal 1909 Mint coins is the engraving of these initials.

This type of piece is the most counterfeited coin in all of American numismatics. A total of four reverse dies are known for this issue, and we do not recommend you purchase them without a thorough knowledge of them.

These price ranges apply mostly to coins minted in Philadelphia and San Francisco. The Denver Mint’s production numbers were significantly lower, and therefore coins marked with a ‘D’ can fetch much higher prices than their more common contemporaries.

Conclusion: A great option to start a coin collection with

The Lincoln Wheat cents in general are a series of coins that have as many lovers as haters. As we have mentioned, these one-cent coins are probably the most collected series in the world for several reasons:

These series are an accessible collection for youngsters who want to start in the world of coin collecting, to advanced collectors with important capitals. In most cases, the former will dedicate themselves to filling in the gaps, as if it were a sticker album; and the latter will seek excellence in all their pieces, trying to get copies in very high states of conservation.

Numismatic Expert & Writer. BA in History and BS in Computer Science. I’m a member of the American Numismatic Association (ANA) and the Numismatic Literary Guild (NLG) and write in several digital media specialized in collecting, auctions and antiques reviews.