Whether you have a 1923 Peace dollar or you are interested in buying one, in this article we will inform you of its value and what factors influence a higher or lower price. Factors such as conservation, mints, and errors can greatly determine the auction price at a numismatic auction.

Starting in 1921, silver dollars in the United States changed their design: from the Morgan Dollar to the Peace Dollar. Its image was kept until 1935, being the last silver dollar designed for circulation, since to this day they are still manufactured in copper, zinc, manganese and nickel. 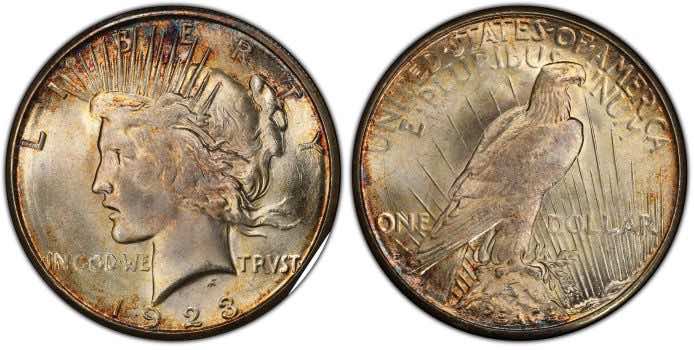 Specifications of the 1923 Peace Dollar

The US minted the 1923 silver dollar with no mint mark at all, besides the 1923 D silver dollar and 1923 S silver dollar. In other cases the mintmark can be easily found on the back of the coin, just below the word “ONE”.

As previously mentioned, it depends on several factors that greatly influence the price, which can range from a meager $22-23 to as much as $120,000.

Grading your 1923 Liberty Dollar is the key

First, we have the state of conservation or grading. This factor is complicated to determine for those who are not experts in numismatics or in the coin we are trying to grade. Nevertheless, it is very important to know the conservation grade to determine the price of what we are going to buy or to obtain the maximum money in our sale of the coin.

How can I find out the condition of my 1923 Peace Dollar? It is simple, there are appraisal companies that are dedicated to this, known as the Third Party Grading Service (TPG), which in addition to giving us a number that indicates the grade of the coin, authenticate it for us.

The TPG will encapsulate your coin as a certificate. In this capsule, they will write the coin’s data along with a barcode and serial number that refers to your coin’s file. 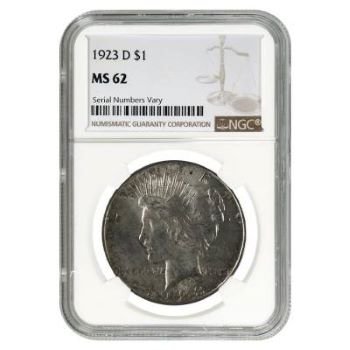 If you want to know more about the grading of a coin click here.

Find out the Mint of your coin

The second factor that influences the price of our coin is its mint of origin. The mint is the place where a coin is produced, and each mint issues a different number of coins, which affects the rarity of your 1923 liberty dollar.

In the case of the 1923 Peace Dollars there are three different mints:

Before moving on to errors, which are the third factor influencing the price of these dollars, you can see a table of prices depending on the factors previously explained.

We can recognize the big jump in prices between MS64 and MS65 to the highest grades. This is due to the fact that, even if they are common coins, it is increasingly difficult to find units in such good condition. This means that higher amounts are paid to get a hold of an outstanding specimen.

Of course any appraisal is merely approximate and may change at any time or for any extra feature that increases or decreases the price.

An example that can greatly vary the price, without being an error in the coin, is the color of the coin, also called “patina“. This condition is acquired over time depending on how and where it has been preserved. In certain cases, silver can acquire a whimsical rainbow tone called “iridescent patina“, which enchants collectors and increases its value, and can be more relevant than the conservation itself. Of course, the sum of quality and beautiful patina results in very high prices.

In general, 1923 dollars are quite stable over time, however, like any currency, they undergo changes to a greater or lesser extent according to times or fashions.

In recent years, specifically the Philadelphia mint peace dollars have increased in price by a few dollars, especially between the MS60 and MS65 grades.

All other mints have also undergone an increase, with MS64 grades from the San Francisco mint skyrocketing to prices as high as $1,050 in 1989.

We should take these cases as exceptions and focus on the stability of recent years, since we have more data on existing quantities and databases with certified and auctioned grades.

With these current prices, we can be sure that we are making a good buy looking back in time.

This year’s peace dollars have a few specific idiosyncrasies that give them extra value for their scarcity. Some of these have their own name because of the change in design. Let’s see what they are.

The Whisker Jaw is noticeable on the jaw of the Liberty bust, which has a notched appearance between it and the neck.

The flaw only exists on coins from the Philadelphia mint and its value increases to about $110 on an MS63 issue or up to $510 on an MS65 grade.

As for the Whisker Cheek, it is very similar to the previous one, but the notch is located on the cheek of Liberty, and its price may be somewhat higher, $275 and $2000 comparing the same qualities as in the previous error. 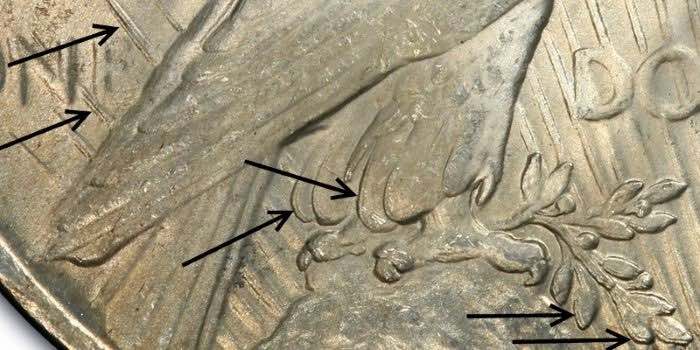 Here we must have a better eye than in the previous errors to appreciate it. On the reverse, there are certain points that are minted twice, so they seem to have a larger flange than a normal coin.

This is also an error that has only occurred in the Philadelphia mint. Their prices move to about $120 on MS63 or $310 on MS65.

In the Denver mint, we find some specimens with this error. This can be seen in the eagle on the reverse, specifically in the beak, which has the appearance of having been flattened in some way.

It is difficult to appraise errors that do not have a name like the ones above since they depend very much on their specific case to be analyzed. However, the TPG can also certify the error of our coin (and verify that it is not a later manipulation) together with the quality grading. This facilitates a sale for more money.

Other relatively common errors that we should be aware of are: 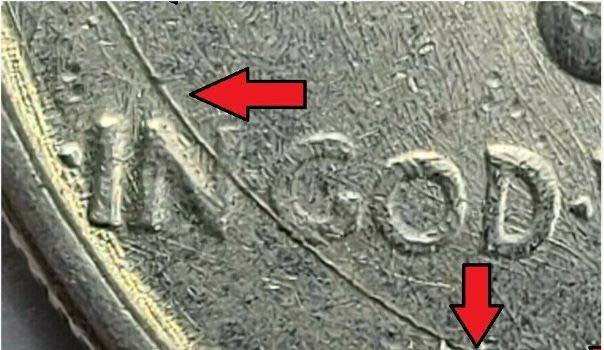 In this case, the die is broken and therefore leaves a mark on the coin at the time of minting. This is usually seen on the edges of the coin as in the photograph shown. 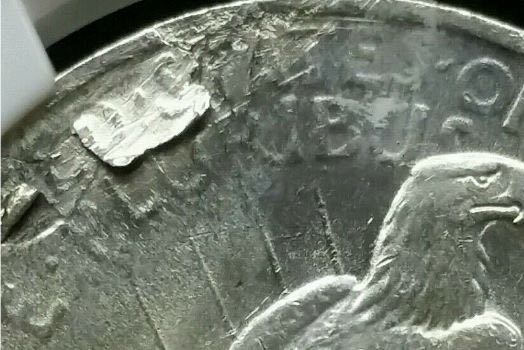 Coins are made up of metal alloys, and if there are impurities in this mixture, they can cause them to become detached from the coin in the form of a sheet. The loss can be of greater or lesser size, even of most of the design. 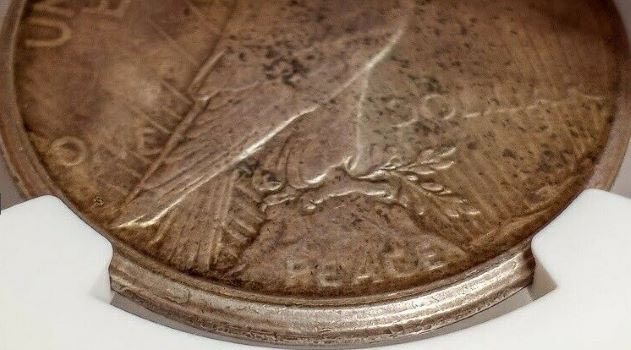 This error occurs when the dies are not properly centered at the time of minting, causing a displaced design where the coin is deformed and expanded and partially minted or even smooth-edged.

As we said, the design of these coins began in 1921 and lasted until 1935. Its designer was Anthony de Francisci, and his initials are engraved in the form of an acronym below the bust of Liberty that appears on the obverse.

On the obverse, Liberty, looking to the left, wears a pointed tiara like the famous statue located in New York. Just between the tiara and the rest of the semicircle that forms the coin in its upper part, we read “LIBERTY” as a legend.

On one side of the neck of the bust is written “IN GOD WE” and to the right of the neck “TRVST“, forming the motto so recurrent in American numismatics: In God we trust. At the bottom of the obverse, we find the year of mintage, in this case, “1923“.

As for the reverse, we see predominantly in the center of the coin an eagle looking to the right as it is perched majestically on a rock while in its talons it holds a bouquet. Below the rock appears the word “PEACE” which gives the name to the type of this coin. From the bottom to almost the bird’s head, rays of light enhance the animal figure.

Just above the eagle appears the legend with the name of the country “UNITED STATES OF AMERICA” and the motto “E PLURIBUS UNUM“. Finally, to the left of the eagle’s feet, the word “ONE” and to the right of these “DOLLAR“, makes clear the face value of this precious silver coin.