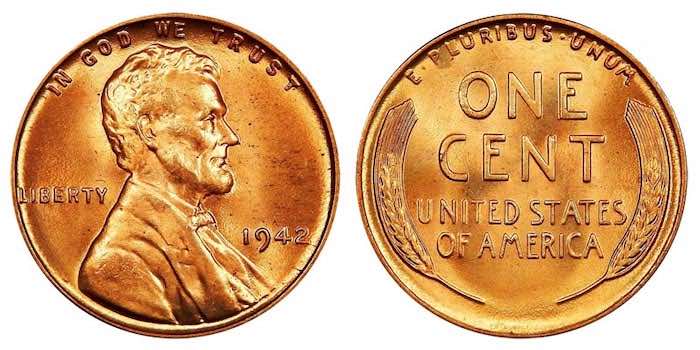 The Lincoln cent is the most produced Wheat penny in the history of the United States of America. Its minting began in 1909 and continues to the present day, having undergone several modifications in its design.

How to identify a 1942 Lincoln Wheat Penny

The Lincoln Penny was designed by Victor David Brenner. With a coin diameter of 19 mm and a weight of 3.11 g, its obverse features the bust of President Abraham Lincoln on the right with the word “Liberty” behind it and the legend “In God We Trust” above. In front of the bust is the date and mint mark (“D” or “S” since the Philadelphia mint has no mint mark).

The value “ONE CENT” and “United States Of America” are flanked by two ears of wheat as a symbol of prosperity. For this reason these pennies are also known as Wheat Reverse Penny. Above is the legend “E – Pluribus – Unum“.

Regarding their composition, these coins were made of 95% copper and 5% tin and zinc, so they are nicknamed the 1942 penny copper too.

What makes a 1942 Lincoln Penny valuable? Types and variants

There are certain dates that, due to their historical context, may be of more interest to collectors – such is the case of the Lincoln Cents of the World War II years.

The 1942 Lincoln Cent was minted at the usual three mints: Philadelphia, Denver and San Francisco.

Below you can see in the photos where the mintmarks of the Denver (D) and San Francisco (S) houses are located. Remember that Philadelphia has no letter, only the date appears.

As we can see, the total production of the 1942 Lincoln or Wheat Reverse Penny was 950,084,000 Regular Strikes and 32,600 units in Proof quality. With these mintage quantities it is vital that we look for high grades of this series for both collecting and investment purposes.

1942 penny worth million dollars? Although it is common to find news with headlines like 1942 D Penny worth million dollars, these pennies are usually in private collections, and it is impossible to see any of them. Every valuable penny included in this list can be considered normal compared to million-dollar pennies. What if you have one of them in your home?

Apparently the origin of this specimen is an aluminum and silver alloy proof, in fact the coin is composed of 98% aluminum, 0.7% silicon, 0.6% iron, 0.5% silver and 0.4% magnesium (in fact we know that totaling the percentages it reaches 100.2%, but this is how the auction house has described it). Another difference lies in its weight, which is 1.563 g compared to the 3.11 g of the normal Wheat Penny.

The reference to this rare and scarce piece is to be found in the book by Judd-2079 and Andrew Pollock-2076 which gives it a rarity level of R.8.

Despite its wide mintage PCGS has only four 1942 D Lincoln Penny pieces listed in MS68 grade and RD (Red) tone, the highest grade for this type.

In spite of the considerable number of minted quantities, there are not so many that have reached us in high preservation until today. Thus, PCGS has only 5 specimens in MS68RD (Red) and 87 in MS67+RD.

In 2016 a specimen belonging to the Jerald L. Martin Collection in MS67+ quality fetched $3,760, a record for a specimen of this year and mint. However in 2019 this same specimen fetched only $840.

The MS67+ grade is the highest for this type in PCGS and has 68 specimens recorded.

This minting error of a 1942 Lincoln Penny minted on dime or 10C modulo coinage graded in AU58 ANACS quality was auctioned at the Heritage Auction (image attached) in 2010 reaching $2,990.

It belonged to the Alfred V. Melson Collection.

In addition to the triple mintmark of the San Francisco mintmark (RPM = Repunched Mintmark), this type also has a double mintmark on the obverse (DDO = Double Die Obverse). For this reason it is more difficult to distinguish and find this variant.

There are 3 examples listed by PCGS in MS67RD quality of the Lincoln Penny 1942-S/S/S/S DDO with one of them obtaining the record as the most valuable example of these characteristics for selling on eBay in 2019 for $2,350.

On this very scarce double mintage mint error on the obverse of a 1942-S Lincoln Cent we found only one specimen in MS67RD quality in PCGS and no specimens in NGC.

The auction price of the specimen shown in the photo in 2020, the only specimen for which we have a record of auction prices, closed at $1,763.

How valuable are 1942 Lincoln Penny proofs?

Going into the Proof grades of the 1942 Lincoln Penny, we will only find Philadelphia mint issues, i.e. without mint mark.

A total of 32,600 Proof 1942 Wheat Reverse Penny Proofs were minted in Philadelphia, the most valuable of which are shown below:

The highest price recorded for a 1942 Lincoln Cent Proof Red Cameo is $17,625 and was achieved for a specimen encapsulated by NGC in 2014. In 2017 a specimen of the same characteristics encapsulated by PCGS was auctioned at $14,688.

Clearly these are very fine specimens with attractive appearance and preservation since other coins with identical grading have been auctioned between 2016 and 2017 with price ranges from $2,820 and $4,700.

In Proof quality you can also get high prices for certain 1942 Lincoln Cent examples such as PR67RB which sold for $690 in 2012.

You can also find very common 1942 Lincoln Cent minting errors, just like on other Lincoln or Wheat Reverse Penny dates, such as off-center mintages, double mintages, etc. but they are less valuable than other cent errors from other dates such as 1943, 1944 or 1945.

Therefore, unless you are able to find certain errors on all 1942 Lincoln Cent coins you get your hands on, you should always try to get them in high MS grades if possible, both if you collect them and if you want to invest in them.