This article looks back into the history of quarters and reveals their most valuable quarters from 1965 to today, and will show you which coin is worth the most, how much it’s actually worth, and a brief overview of its history.

Is a 1965 quarter worth anything? Estimated Value of 1965 Washington Quarters in mint state is:

Therefore, it is worth reading the following article to learn about the errors or variants of the 1965 Washington quarter that are most valuable and in demand in today’s market, due to their scarcity or peculiarity.

Quarters with silver? What year quarters have silver?

Washington’s last quarter coinage in 90% silver took place in 1964. When did they stop making silver quarters in a silver planchet? From that date onwards its composition became a copper and nickel core.

In this post, we are going to focus on the first year of the Washington quarter’s cupronickel coinage that took place in 1965. In spite of the high number of pieces minted – more than 1.8 billion – it is not very common to find the Washington quarter without signs of having been circulated.

Since the material the coins are made of has no value – due to the absence of silver – you should look for the highest graduations and the best preservations for the Washington 25 cents whenever possible.

It’s possible that more 1965 silver error quarters are in existence. But how would you identify one? It’s simple. The easiest method is to weigh the coin on a calibrated gram scale. The standard clad quarters weigh 5.67 grams and the 90% silver quarters weigh 6.25 grams. You can also use the eye test. Silver quarters are shinier and they don’t have any copper or nickel layers showing on the edge of the coin.

Apparently, the silver 1965 Washington quarter is the same as those made of cupronickel, being easily confused.

How can we detect this error so sought-after and valued by collectors and investors?

There is only one way to prove it – by its weight. The 1965 Washington silver quarter weighs a little more than 6 grams, while the 1965 Washington cupronickel quarter, as we saw at the beginning of the article, weighs 5.67 grams.

This is a very difficult error to find since there are a lot of copies on the Internet. In fact, during 2020, we have not seen any pieces at auction in any international auction house.

1965 silver Washington quarters that appeared in auctions in years before 2020 have been auctioned for between $7,200 and $8,500 depending on their gradings.

What’s a 1965 quarter worth? The price range for post-1965 quarters spans from a high of $19,200 to the $9,200 of the fifth position. In this ranking you can see the hammer prices achieved by this type of coins according to Heritage Auctions.

Why are 1965 quarters valuable?

Are 1965 quarters worth anything A 1965 Washington quarter in a very high graduation like MS68 reached a value of $1,300 in 2020. So high is its scarcity at this graduation, PCGS has no specimens registered in this quality and NGC only 9 specimens. In case you want to know the prices of other years just click on Quarters worth money – Auction records.

Characteristics of a 1965 quarter dollar

Here is a summary of the characteristics of the Washington quarter that you should know:

Due to the time and resources needed for the production of proof series, in 1964 these ceased. However, in 1965 they began to mint coins of superior quality.

The 1965 quarter SMS (Special Mint Set) was produced at the San Francisco Mint, although the mint mark does not appear, with the same characteristics as the Philadelphia mint. A total of 2,360,000 SMS units were minted.

What rare 1965 quarter errors are worth money?

A common error in these two currencies (1965 and 1965 SMS) that makes their price rise above the average, is known as off-center minting.

This error occurs in the manufacturing process when the die is not fixed in the correct position before the coinage, producing the printing of the wedges outside the established limits.

For this reason, the design of the obverse and reverse are displaced from the center of the coin. This offset can be from 1% to 99%.

The demand and value of these pieces lie in the percentage of the off-center they present (the higher the off-center, the higher their value) and in the data that can be seen in the resulting coin.
In the following table, we reflect the prices of pieces that have appeared in auctions in 2020. You can see that they do not appear very often in international auctions although they are not so difficult to find on the Internet, although at a higher price. 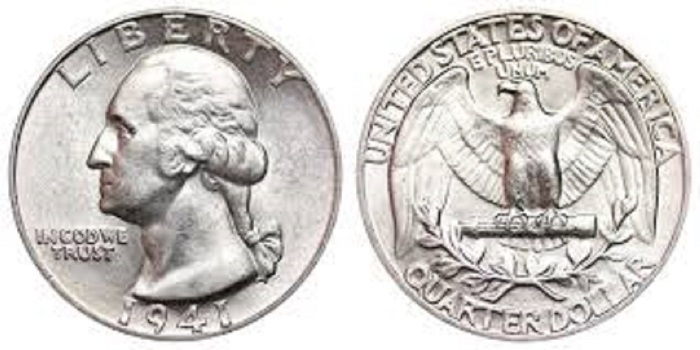 That year, 1965, was minted in large quantities and presumably, this error was caused by using a certain consignment of silver planchets dated 1964 for the year 1965.

In the third place of  most important 1965 quarter error is another type of 1965 Washington quarter originated by a mistake in the minting of the obverse. It is not easy to detect it with the naked eye either, which is why you may want to pay attention to the phrase “IN GOD WE TRUST” and the word “LIBERTY” on the front. These are the areas where this double minting is best appreciated. It is also common to see these double mints on the nose and mouth of Washington on some 1965 quarters.

There is another variant similar to the previous one, but in this case the double minting is produced on the reverse side and is better appreciated in some letters of the “QUARTER DOLLAR” value.

Reviewing the market for these two variants, the error on the back is less valuable than the double coinage on the front, as it is not such a sought-after piece by collectors. Its price is anywhere between $25 and $175.

The year 1965 was also a transition year for other American currency modules such as the ‘dime’. For this reason large quantities were minted, and different coin planchets were used during 1965 for different modules and dates.
Thus, there are pieces of 25 cent Washington coins from 1965 that were minted on dimes (10 cents), 5 cents or 1 cent coin planchets. Here are some examples:

They are easy to detect visually since part of the coin is somewhat trimmed as it cannot accommodate the smaller planchet dimensions of a 25 cent, and even for the value of 1 cent which is a different material composition.

They are also detectable with a coin-weighing scale, as in the case of the 1965 silver-minted quarter. For example, this is because the 5 cents planchet weighs just 5 grams and the 25 cents coin weighs 5.67 grams.

Only 3 copies of this rare and unexplained error are known, consisting of the same minting of the reverse side on both sides of the coin. Two of those three copies were sold long ago for $80,000 and $41,000.

Since the back does not show the date, it is not known exactly if the error belongs to this year, but numismatic experts consider that the date of minting was between 1965 and 1967.

Do you want to know more about 1967 quarters? Click here to find out all about the value of the 1967 quarter.

As a warning, we will say that there are many counterfeits of this error, created by cutting Washington quarter coins in half and then gluing the two backs together. To avoid being cheated, we have to look at the edge of the coin and its exact weight.

The error comes from the fact that the coin could not be expelled after the printing of the obverse and reverse, and received another minting blow. Its price is over $400.

It is also normal in this error for a certain rotation of the obverse and reverse of the same coin. Since they cannot be expelled, they frequently remain turned before the second or following mintings.

This makes it difficult to check their authenticity in photos, and a visual check of the piece with this error is absolutely necessary.

To conclude, here are some examples of other types of errors or known variants of these 1965 Washington 25-cents called “Broad struck” and “Struck Through“.

In one of them the ring that holds the coin in the coinage did not work properly and the coin is minted as if it were expanded, so its legends look longer and flatter than normal.

In the “Struck Through” variant, some kind of impurity (staple, clip, etc…) got between the die and some of the wedges at the moment of the coinage, leaving an imperfection in the coin.

They are not as sought after as the variants we have seen previously in the article, but if you come across any of them, you will multiply the value of your quarter.

Final key points to finding the most valuable quarters after 1965

In light of this article, our recommendation is to establish a series of routines when reviewing every 1965 Washington quarter that falls into your hands, in case it has more value than you first thought:

Here’s a quick recap of 1965 Quarters worth money: