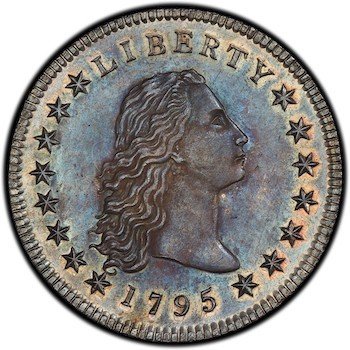 In 1794 began the minting of one of the most valuable silver dollars. This had in its design the Liberty symbol with the loose hair waving in the wind. This is the reason why it is nicknamed the Silver Liberty Dollar or Flowing Hair Silver Dollar.

The 1794 dollars are extremely rare and valuable. In fact, the most expensive coin in history is a dollar from that year, priced at over $10,000,000. For that reason, in this article, we focus on those minted in the following year, 1795. The latter were minted in greater numbers and kept the original design until October of that year, which was changed for another one as we will see later on.

We will also solve issues such as identifying a 1795 Liberty dollar; variants and their prices; how to know if it is true; its main frauds and in case it is a fake, its value.

What is the value of 1795 Silver Dollars?

An authentic 1795 dollar in high conservation is highly valued by collectors and usually reaches high prices. We must also remember that in 1795 there are two different models, the Flowing Hair Silver Dollar and the Draped Bust Dollar with differences in their designs and prices.

On its obverse side, we can recognise the Liberty bust in the shape of a woman’s head with loose hair. Above her head appears the legend “LIBERTY“, and below it the year of issue, “1795”.

On its back, an eagle appears in the center with laurel leaves wrapped around it. With a circular legend surrounding the design, appear the inscription “UNITED STATES OF AMERICA“.

How much is a Flowing Hair Silver Dollar?

There are two 1795 flowing hair dollar varieties. They can be differentiated by the leaves of the design on the back, located under the eagle’s wings – specifically, whether there are two or three.

In addition, there is another much more valuable variant, which includes a tap for a plug to adjust the weight.

As for the second design from 1795, the Draped Bust Dollar, it has a lower price, but it is still an extremely interesting and valuable coin to collect.

On the obverse side the bust changes its design, that even though it is again the Freedom in the symbol of a woman, the hair is slightly gathered in the middle of the head. Instead of having a naked bust, in this case, it has a mantle covering it.

The reverse side repeats the same design, with the same legend included, referring to the country of issue, the United States of America.

It has, in this case, two variants, one with the bust aligned and the other not. The price of one with respect to the other is not too far away in the graduations of the first MS ranges, but it can be noticeable in the higher ones.

Of course, we have to take all prices as estimates, as they can vary quite a bit depending on the situation.

How do you identify a 1795 Liberty Dollar and how do you know if it is genuine?

As we have seen, these are very valuable coins and are therefore counterfeited by swindlers, which is why we have to look at certain details to ensure that we are dealing with an authentic Liberty Dollar from 1795.

#1 The weight, material and measurements

Regardless of the design, this year’s dollars weigh 27 grams and may vary slightly, but no more than 0.1 or 0.2 grams.

The closer the dollar is to 27 grams, the more certain we are of its authenticity.

In addition, the diameter of these dollars should be 39.5mm.

Its content of approximately 90% silver makes it impossible to stick to a magnet, so if it is attracted to one, it is a fake.

Forgeries may not be identical to the originals in appearance, and in fact, they often have some error that can tell you it’s a fake.

For this reason, my recommendation would be to carefully compare every detail of your currency with one you know to be 100% authentic (for example, images from internet auctions). Don’t be casual about counting the stars, number of leaves or even the eagle feathers on the back; we’re talking about a lot of money at stake.

There are very complete guides that I recommend for comparing authentic coins with their main counterfeits. They will indicate certain signs to look out for, such as marks on the neck, the shape of the stars, etc.

Indeed, grading a coin is not that easy. Independent companies that verify your coins and encapsulate them as a certificate of authenticity are widespread in the North American numismatic market. This option is to resort to TPG (Third Party Grading Service).

This is the safest method if you are not an expert on your coins when buying or selling them. Furthermore, it not only guarantees that it is authentic but also gives you an objective graduation, which along with rarity is what the value of a coin depends on most.

If you have a coin that you have doubts about, you can contact these companies; and being a high-value coin, you can send your coins and pay to certify them to be sure that it is not a fraud.

#4 Other appraisers and auctions

Another method is to look for professional experts in numismatics to help you solve your doubts without having to send them to be encapsulated.

One of the quickest and easiest methods is to buy and sell your coins through auction companies, which will verify and price them, offering you guarantees on their purchase.

One precaution to take before buying a coin at auction is that there is always a commission. This is usually between 15% and 20% of the winning price at which you bid. In addition, the price of shipping may not be included, so all those extra expenses should be considered as part of the price of your new numismatic acquisition.

If you have any doubts about the authenticity of a valuable coin I would recommend the last two methods, as they are the safest.

My coin is fake, what is the value of the copy?

If by some circumstance a copy or counterfeit of a dollar from 1795 falls into our hands, I am afraid it is not usually worth more than a couple of dollars. You can either keep it until you get a real one or sell it on with the warning that it is a fake.

My recommendation against this type of fraud is to stop the circulation of this currency among collectors and not to make a business out of cheating other numismatics collectors.

A little history about the first Silver Dollar

One reason to start collecting coins could be their rarity or great economic value, however, historical value could be the greatest benefit in numismatics.

In the United States of America, the “8 reales españolas” coins were used as the standard reference currency until 1794. The reason is that these were accepted all over the world and many countries started to copy them.

The US was no exception and, in fact, these dollars we have talked about are the same size and weight as the famous Spanish “pillar dollar”. The US dollar symbol itself ($) is inspired by the columns of the 8 Spanish reales fused with the standard that is also in their design.

As this Spanish silver coin was the first to circulate as an official U.S. currency, many American collectors consider it part of the numismatic history of North America. They are therefore highly valued in the country and are part of the collections of many numismatists.

We must remember that these silver coins were minted varying the design and certain characteristics from 1794 to 1935. However, one dollar coins are minted even today, so we can extend our collection as much as we want, taking into account that the current coins do not have any silver content.

HOW MUCH IS WORTH?